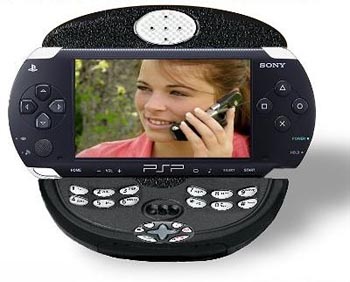 The rumors are running rampant about a PlayStation Phone that will be marketed under the Sony Ericsson banner, and it only makes sense, giving the direction that the company has taken with its other product lines. We’ve got the Walkman series, dedicated to providing us the best in music. The CyberShot camera phones focus in on taking good snapshots. There’s even the Bravia TV phone, so why not make a cell phone that directs your attention at mobile gaming and sell it under the PlayStation banner? It wouldn’t cannibalize sales of the PSP, now would it?

In any case, the people at Pocket Gamer stuck their noses out and made a few predictions (more like a wish list) of what the PlayStation Phone would look like if it ever came to fruition. They expect that it’ll rock a sliding form factor like the W850i so that the calling keys can be hidden away when not in use. On the main front, you’ll get your standard set of Sony video game buttons (triangle, square, etc.). Who knows, they might even throw in an analog stick for good measure.

Naturally, the PlayStation Phone (sometimes refered to as the PSPhone) “would also need impressive 3D capabilities”, the likes of which Sony could get from their friends at Nvidia, the same people that provided the graphics of the PS3. If they want to keep everything connected, the PS Phone should also need WiFi and Bluetooth, as well as the usual stuff like a camera, music player, and basic organizer.