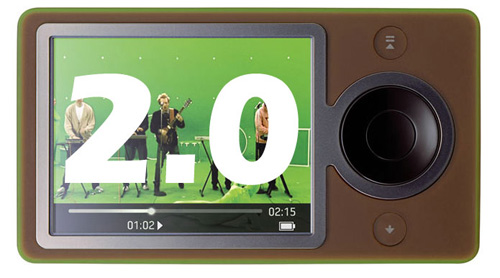 The hottest news coming out of Redmond is a whole whack of details surrounding not only the second-generation Microsoft Zune, but also a nano-sized Zune with flash-based memory. An unnamed source at the company let loose with several tidbits of juicy information for us to munch on and they are as follows.

Regarding Zune 2.0 (as it has come to be known), the player will have the same two-layered casing and the same-sized footprint. They will make it thinner (thank goodness), but they make no mention of expanding the storage capacity.

More interestingly, when it comes to “Flash Zune” — the iPod nano competitor — we discover that it will be video capable, the screen will cover 75% of the front, it’ll rock WiFi, and it will have the same “doubleshot” appearance as its bigger brother. Look for the Flash Zune to measure 3 x 1.25 x 0.25 inches.

Both the second-gen Zune and its nano-sized compadre are expected to ship some time this year. The design phase “is over, but some tweaks to hardware will occur.” Shortage of units should not be a problem, as they expect to have 2.4 million next generation Zunes in time for the holiday season, with 2/3’s of that stock being dedicated to the Flash Zune.