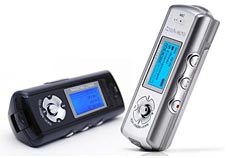 Because they’re calling this the iRiver F700 Recording Edition, I’d have to assume that it either has a built-in microphone of some kind or at least a mic jack so that you can do some rudimentary voice recording. Even so, it’s pretty obvious that the F700 is first and foremost a portable MP3 player, and a rather generic-looking one at that. On the plus side, it packs in lots of storage capacity (four gigs), lots of battery life (40 hours on a single dry cell), and an adequate number of features for customizability.

The blue backlit display looks alright, and it’s good that you can partake in music search, adjust the equalizer, and even change up the bitrate when it comes time to actually do some sound recording. When you’re tired of all that, there’s also the integrated FM tuner.

The iRiver F700 Recording Edition reportedly retails in Japan for a remarkably cheap 3,000 Yen (US$25). That’s got to be a typo, right?