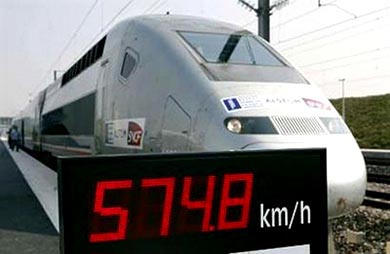 While the Japanese are perhaps better known for their bullet trains, they’ve got themselves some pretty hefty competition on the other side of the planet. A modified version of the French TGV (Train a Grande Vitesse) just set a new speed record of 574.8 km/h or about 357.2 mph. That’s a record for trains that actually ride on rails (the Japanese bullet train uses a different system).

The Train a Grande Vitesse — which, if my high school French holds up, means a train of big fast high-speed train — was loaded up with “two supercharged locomotives and oversized wheels” and then it was sent barreling down “a specially prepared track east of Paris.”

That’s pretty frigin’ fast. In fact, it’s as fast as a small plane, beating out their old record by over 40 km/h. The French hope to market this technology to other countries, particularly China where a high-speed railway is being built between Shanghai and Beijing.