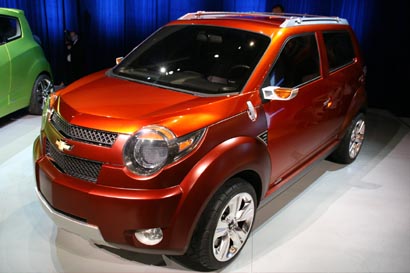 Introducing us to the “adventurous spirit of modern grunge” is the Chevrolet Trax concept vehicle, a car designed for active city dwellers who want the option to go off-roading on the weekends. What you get is a bold SUV-like appearance in a package that is possibly even more compact than the Cobalt and considerably smaller than the Chevy HHR.

Like the Honda Element, the lower half of the body comes in a matte finish, furthering the whole idea of being a rough and tumble vehicle. Other pronounced features include faux skid plates and wide fender flares. Because it is an entry-level vehicle, the Chevy Trax has been outfitted with a lowly 1.0L gas engine that powers the front wheels. A battery pack and electric motor have been shoved in the back to drive the rear wheels on an as-needed basis. This makes for one of the most efficient all-wheel-drive systems out there.

At the official unveiling in New York, they had but a shell of a car with no interior to speak of, but the exterior is bold enough as is to get people talking. On a side note, the design came from Daewoo, GM’s Korean arm.