Long gone are the days that an electric vehicle was necessarily slow and ugly-looking. While I continue to lust after the Tesla Roadster, a different company is taking the electric bike approach. A123Systems created the KillaCycle, an all-electric motorcycle that has broken the world record for the fastest quarter mile set by a vehicle powered by lithium-ion batteries. It took the killer KillaCycle 8.16 seconds to complete the quarter-mile drag with a trap speed for 156mph.

The KillaCycle gets its thrust from 990 A123Systems Nanophosphate cells, delivering over 350 horsepower to the motorcycle drivetrain. Whereas the Tesla Roadster takes about four seconds to do a zero to 60mph run, the KillaCycle can do it “in under 1.5 seconds.” I guess it helps that this bike weighs in at a mere 165 pounds. That’s probably lighter than most (all?) of the guys in the photo provided.

Designer Bill Dube (third from the right) is thrilled that they “improved our time by over 0.6 seconds, a huge performance increase” in just three months of work. “With these batteries, we know that we will be able to continue to improve our performance and establish new records.” 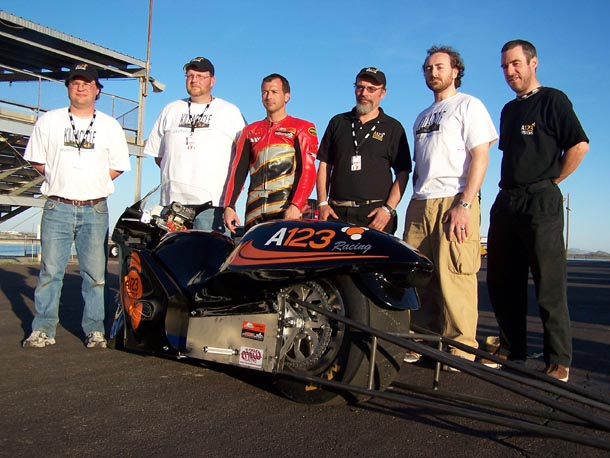