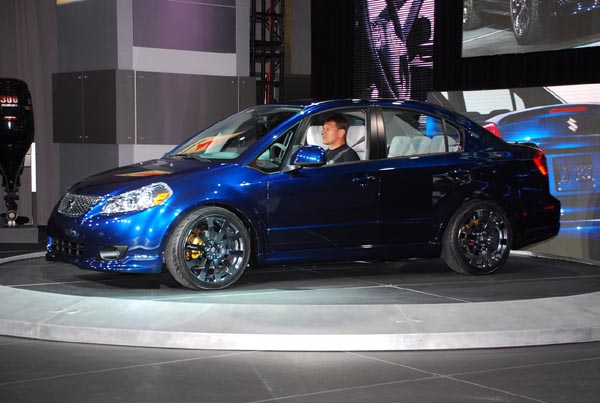 Suzuki is apparently in the middle of a revolution, releasing a series of vehicles that are designed to be sporty and fun to drive. The SX4 hatchback is one of the most economical 4WD vehicles you can get your hands on, but for the average Joe, this recently revealed SX4 sedan may be a little more appropriate.

Showcased at the New York Auto Show, the Suzuki SX4 sedan is said to contain a little bit of sportbike DNA, courtesy of the legendary Hayabusa and GSX-R1000. It might not handle as well as its two-wheeled brethren, but it’s probably a lot more practical. The SX4 sedan gets powered by a tame 2.0L inline-four, though tuners will probably take to this engine to coax out a few more horses. In fact, Suzuki is saying that this car is being targeted at “young enthusiasts.”

On each corner, you’ll find KYB dampers. I can personally attest to KYB’s quality as that’s the brand that supplied the aftermarket shocks to my Integra. Even so, I think I’d still rather get the WRC Edition SX4 over this more family-oriented sedan.