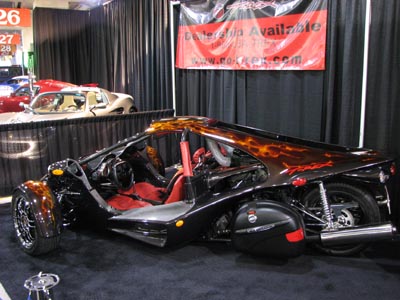 A couple months back, I received an email that asked if I was interested in taking the T-Rex for a spin. I gladly replied to that message with an enthusiastic yes, but the PR people never got back to me after that. Although I was sorely disappointed to miss the opportunity to take one of these bad boys for a rip around the track, it was nice to at least finally see them in person at the Vancouver International Auto Show. What’s more, here’s a video of a T-Rex that has received a fiery hot custom paintjob. It sits next to one that boasts a very bold blue coat of paint.

The flaming T-Rex was apparently purchased by some guy who lives in Victoria, BC, and when I asked the rep how much that custom work cost, he said that he wasn’t sure but it must’ve been “a pretty penny.” As if the T-Rex wasn’t hot enough to begin with.