Something’s not quite right when you’ve got a spoiler hanging out the back that’s almost as big as the rest of the car, but that’s exactly what Suzuki has done with their SX4 WRC Concept. As you may already know, the WRC — World Rally Championship — is easily one of the best known and most competitive rally circuits out there, and it has historically been dominated by 4WD/AWD offerings from Subaru, Mitsubishi, and Peugeot. Suzuki isn’t exactly ready to be left in the dust.

This ridiculously powerful concept car, based on the ultra-economical (sub-20k) SX4 and showcased at the Vancouver International Auto Show, gets powered by a turbocharged 2.0L engine good for 320hp at 4500rpm. And that’s not even the most impressive number. You’ll also note that this little pocket rocket boasts 470 lbs-ft of torque at 3000rpm. To control all that power, it’s got huge ventilated disc brakes (370mm front, 304mm rear) and to top it all off, it barely tips the scales at a mere 1,230 kg. 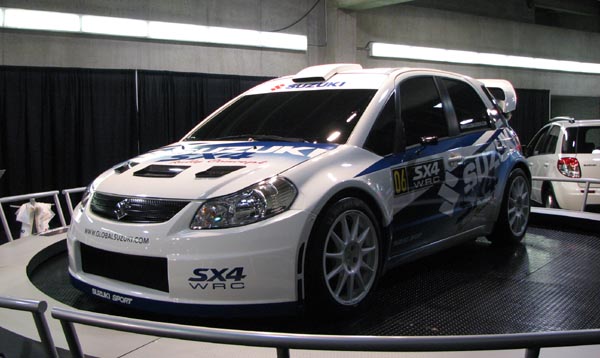