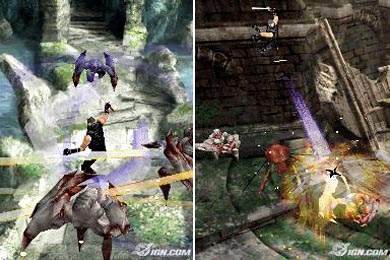 With some games on the Nintendo DS, the touchscreen is just a tacked on gimmick that really adds nothing to the gameplay. With other titles, it is because of the touchscreen that it’s so much fun. I’m not really sure where the verdict lies with Ninja Gaiden: Dragon Sword for the Nintendo DS, but here’s a video demostration of the intuitive touchscreen controls. Nearly all the movements are done via the stylus: you just poke the screen where you want Ryu to go. To toss enemies into the air, you give the screen a quick upward swipe.

This is starting to sound similar to Mario Hoops 3-on-3, which may or may not be a good thing depending on your perspective. I think that platformers and action games should stick with the traditional d-pad (or analog stick) approach, but that’s just a matter of personal preference. I don’t doubt that I’ll end up playing this game in the end, though, because who can resist the ninja tactics of Ryu?