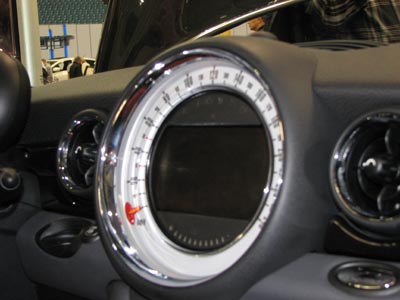 Over at the Vancouver International Auto Show, which runs until April 8, you can find all sorts of funky vehicles from nearly every car manufacturer catering to the North American market. I’ve always been a fan of the Mini Cooper, because it offers something distinctly different from the rest of the crowd. I haven’t had a chance to drive one yet, but the interior is pretty darn unique. While other Mini Coopers have a giant speedometer in the middle of the dash, I thought this one was particularly interesting because it places a display in the center where you control your radio and so forth.

Instead of having a needle mounted in the circle to point to your current speed, there is a little red indicator that goes around the outer bezel of the speedometer. Funky stuff. Mini enthusiasts will probably point out to me that this isn’t anything new, but hey, it was new to me.