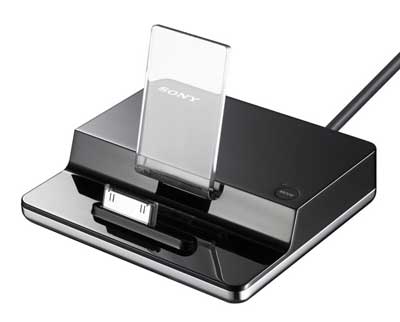 For years, Sony pretended that the iPod didn’t exist, preferring to promote its own MP3 player and its own accessories. Now that the electronics giant has seen the light and joined the iPod accessories stable, the sky seems to be the limit.

The latest crossover effort is a dock for those of you who have the video variety of Apple’s ubiquitous music player. This one is the TDM-IP1 Digital Media Port, and you can just plunk that little video player down on the connector and watch movies or TV shows to your heart’s content on your Sony Bravia.

Since this is a dock, you’ll also be charging that iPod. That’s all to the good. The design is rather understated yet classy. That’s all to the good, too. What might set you back—emotionally as well as financially—is the price. To get one of these docks, you’ll have to pay US$99. That’s probably peanuts compared to what you paid for that super-HD Bravia TV, but it’s more than most iPod docks, even video ones, cost. Nobody every accused Sony of ignoring an opportunity—once they got around to it.