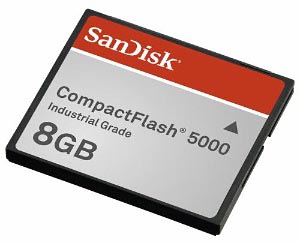 As an industry leader in flash-based memory, SanDisk has a big name to uphold in the marketplace. Not only do their memory cards have to pack in oodles of storage, they’ve also got to be reliable and maybe have a little something extra to put them up and over the competition. SanDisk announced their new CompactFlash 5000 series today, a line that is high-performance, built tough, and designed with the industrial market in mind. Even the card says that it’s “industrial grade.”

“With out industry-leading technology roadmap and leadership in the flash memory market,” said Greg Rhine, senior vice president and general manager of SanDisk’s Consumer Products Division, “SanDisk is uniquely positioned to meet the demands of industrial users and applications with our industrial grade CompactFlash 5000 product line.”

These new cards will be available in 512MB, 1GB, 2GB, 4GB, and 8GB capacities, all of which have sustained read/write speeds of 30 megabytes per second. That’s pretty fast. No word on pricing, but mass production is scheduled for the end of May.