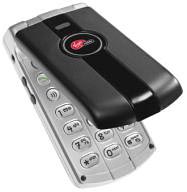 “Like a Virgin… Touched for the very first time.” Let’s just say that Virgin Mobile, much like Madonna, has been around the block quite a few times now and it’s not exactly accurate to call it a virgin anymore. Virgin Mobile USA is, ahem, “well experienced” and they have taken this knowledge of the marketplace and applied it to their latest offering, the MARBL flip phone by Kyocera Wireless.

They did some research among the 15- to 34-year-old segment and found that 68% currently have a clamshell and most expect their next phone to be the same. So, the MARBL is a flip phone. Virgin Mobile also knows that people want great value from their phones. So, the MARBL is just $29.99. They didn’t say explicitly, but I’m sure they can see the popularity of Motorola’s shortened naming scheme (RAZR, RIZR, SLVR), so they did something similar with the MARBL. The only piece of the puzzle that’s missing is that this phone isn’t as feature-packed as some people may hope: there seems to be neither a camera nor an MP3 player here. But hey, those black-on-black accents are pretty attractive.

The Kyocera MARBL is available now, wherever you get your Virgin Mobile USA gear.