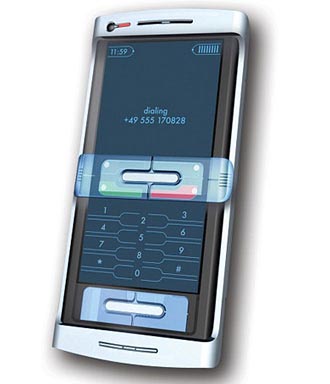 We’re still a couple of months away from getting the Apple iPhone, but in the meantime, we have plenty of copycats out there to consider as well (though very few, if any, of them will admit to being copycats). BenQ’s own design house, Product Visionaries, created this touchscreen cell phone, and much like the iPhone, it looks pretty darn sexy.

The little translucent blue thing in the middle can slide in either direction. When it is placed where it is shown in the picture, you get a semi-conventional numerical keypad so that you can dial your calls. Slide that thing all the way to the bottom, and you get a fully unobstructed view of your widescreen videos. I’d imagine they implented some sort of on-screen QWERTYness too.

Alas, this beauty of a BenQ is but a concept at this point. Heck, they haven’t even named the thing, so it might be a while before this becomes a reality.