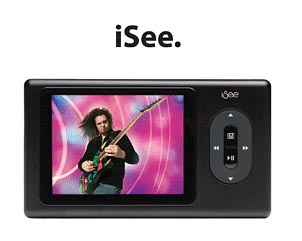 Are there enough lower-case i’s in there for you? ATO is in love with Apple’s portable media player and they’re showing it with the second-generation iSee 360i 360i Video Recorder. In essence, this accessory transforms your iPod into a portable DVR station, translating just about any analog source into something iPod-friendly. When the iSee is combined with an iPod, you get a “fully integrated unit.” ATO has three configurations ready to go at this time: one designed for the 2GB Nano, 4GB Nano, and 30GB Video.

Sporting a 3.6-inch color screen of its own, the iSee 360i actually offers a larger viewing area than the iPod Video that it attaches itself to. The bundle also includes free adapters for the iPod 1G/2G nano and iPod 30GB video, but it won’t work with the 60GB/80GB Video, iPod Photo, or iPod Shuffle, at least for now. The price has also been lowered on this second-generation offering to $50.