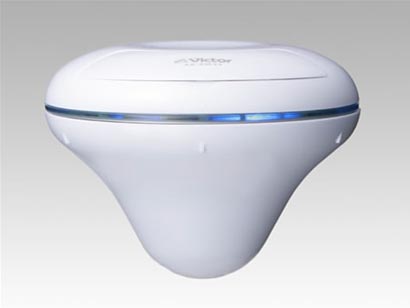 If you’ve ever watched David Letterman, there’s a good chance that you’ve caught a clip where he plays the game, “Will it float?” putting a series of different items in a pool of water to find out, you guessed it, whether that item floats. Before the late night host had a chance to put the JVC XA-AW33 waterproof MP3 player to the test, we’ve already discovered that this music player does indeed float.

The next time you take a lazy Sunday bath, you might want to bring this glossy white number along (it’ll fit right in with the rest of your bathroom appliances) so that you can bob your head to some Gnarls Barkley, Josh Groban, or Mozart. You know, whatever you’re into.

The flat speaker by NXT sits at the top of this player, sending vibrations through the water and thus creating some fun ripple effects in time with the music. The blue LED also syncs with the tunes “to deliver a soothing effect.” On the downside, the XA-AW33 from JVC only packs 256MB of memory, though it’ll handle MP3, WMA, and WMA-DRM files without a hitch. With four AAA batteries, you can expect around 15 hours of playback.