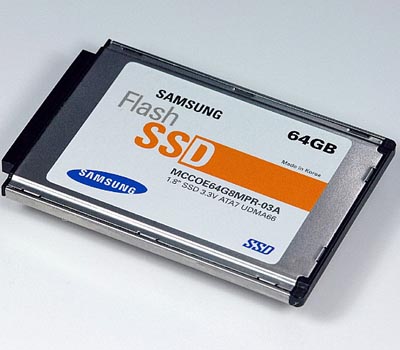 SanDisk seemed all proud of their UATA 32GB solid state drive, but a certain Korean company just couldn’t let the Flash memory manufacturer take the spotlight away from them. Samsung is jumping into the SSD limelight with a 64GB 1.8-inch Flash-based drive. What’s more, this SSD “is based on an eight gigabit single-level-cell (SLC) NAND, which provides significantly higher performance over conventional SSDs.”

Samsung is also claiming that the new SSD is faster than the 32GB model they revealed last year: read speed is improved by 20 percent, whereas write speed is improved by 60 percent. The flash-SSD is a drop-in replacement for a hard disk drive in a laptop, whereas smaller models would work great in personal navigation systems and digital camcorders. Samsung is even claiming that they can create larger (100GB+) models for servers.