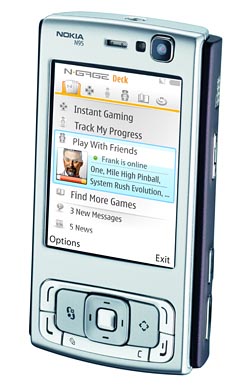 When Nokia rolled out the N-Gage the first time around, it didn’t catch on quite as well as they had hoped. For this sophomore entry, they’ve taken the Series 60 software route instead of creating a whole new device, and from what we can gather, it’s “better than we expected.”

According to Gizmodo, the “whole experience” is akin to “Xbox Live Arcade for mobiles.” The games surely will not be as complex as those you find on the Nintendo DS or Sony PSP, but you get to enjoy some great casual games with your friends… wirelessly. You can maintain a list of usernames, gamer points, profiles, and “arcade-like games from studios like EA and Gameloft.”

Perhaps the best part of this whole new N-Gage arrangement is that it’s subscription free. You only have to pay for the game itself! They’re also emphasizing free trials, as well as TV-out, cross-platform compatibility, and over-the-air downloadability.