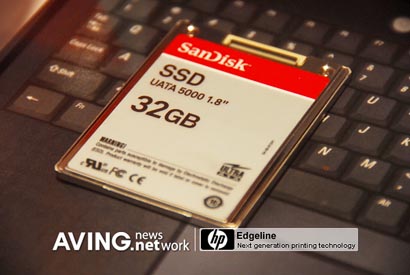 It might be some time before we completely eliminate the need for spinning platters, but as the capacity on solid state drives continue to increase, the less we will rely on conventional magnetic hard drives. SanDisk moseyed on over to CeBIT and showed off their Ultra ATA 5000 solid state drive (SSD). Measuring just 1.8-inches and holding 32 gigabytes of memory, this solid state drive is said to operate much faster than regular hard drives, meaning it’ll boot up the operating system on your laptop at more more expedient rate.

Based on the data provided by SanDisk — which wouldn’t be biased at all, right? — it took a HDD-equipped laptop a total of one minute and 12 seconds to boot up Vista and load Office 2007. By contrast, a laptop sporting the 32GB SSD performed the same task in just 44 seconds. The two notebooks were otherwise identical.