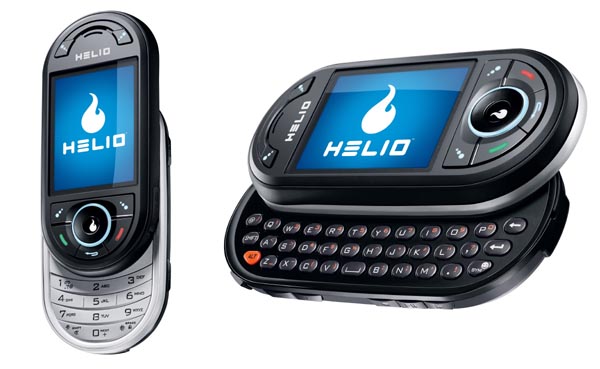 We first spotted this new Helio-branded smartphone earlier this month, and at the time, we recognized it as the Oz Smartphone. I guess the folks at Helio aren’t exactly fans of Dorothy and the rest of the Wizard of Oz crew, so they have officially renamed the three-layer slider as the Helio Ocean. Yes, because it is that vast.

As a refresher, you can slide the phone up in a traditional way to reveal a standard numerical keypad or, alternatively, you slide it sideways like the HTC Wizard to get your hands on a text message-loving QWERTY keyboard. “Designed to be the ultimate social networking tool,” the Helio Ocean features a 2.4-inch 260k color QVGA display, external stereo speakers, 2.0 megapixel camera with video and flash, stereo Bluetooth, built-in HTML web browser, 200MB internal memory, microSD expansion up to 2GB, GPS, high-speed 3G, MySpace, USB Mass Storage Mode, and an integrated media player.

There’s a lot of meat (fish?) to enjoy on the Helio Ocean, both in terms of features and in terms of physical girth, but surprisingly, the price isn’t all that fat. Look for a Spring ’07 launch of the Ocean with a suggested retail price of $295.