I’m not exactly sure how functional or usable this design would be, but it certainly is a major departure from conventional thought. The “Lazy Thumb” cell phone created by Koo Ho Shin does not have a normal numerical keypad nor does it have a touchscreen. Instead, it sports a unique sliding mechanism operated by just three buttons.

You see, while most sliders consist of two parts — the top half and the bottom half — the Lazy Thumb has three levels of sliding, giving it three kinds of functionality. The rest of the input is done primarily through voice-activation, including speech-to-text SMS messaging. Just don’t try to use it in the library.

On a side note, I like the look of the high-end model, but the conventional model looks a little too much like a generic MP3 player for my tastes. 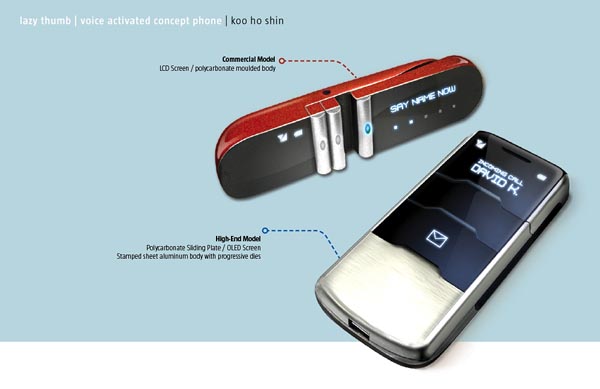