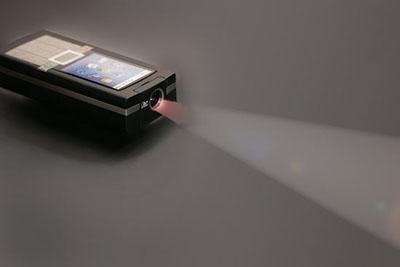 Market-watchers and students of new media could have probably predicted this, although it might be slightly ahead of its time. Texas Instruments is showing off a working prototype of a movie projector that can fit inside a cell phone.

TI are calling it a “pico” projector to emphasize its tininess. Using this projector, you can shine DVD-quality images onto any surface you like, turning the barest of walls into a videoscreen. And even though the projector is just 1.5 inches long, it can generate a particle beam wide enough to approximate a widescreen TV presentation.

The key to the new-look streaming video is digital light processing, long a staple of projectors but a dud in the rough-and-tumble television world of LCDs and plasma screens. The DLP projector process consumes less energy than those other methods, TI says.

It’s not yet clear when you can get your hands on a working model. Initially unwrapped at CES as a concept-only device, it’s now a projector-only phone look-alike. As soon as both technologies have been married under one roof, we’ll have something to look at.