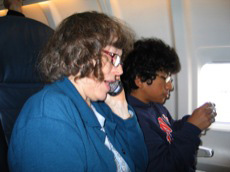 The FCC has finally done something right. Those of us who are dreading the day when our fellow airline passengers can annoy everyone else with their in-flight chit-chats on mobiles have received yet more good news. How temporary that good news is remains to be seen.

For now, though, the chairman of the U.S. Federal Communications Commission has suggested that the ban on using mobile phones during airline flights should remain in place for some time to come. The airlines still haven’t worked out totally how to keep mobile phones from interfering with flight operations. Some hurdles have been cleared, however, and FCC commissioners can very well approve the use of in-flight mobile phones over the chairman’s suggestion. Most of the commissioners are already on record as supporting the removal of the ban.

Another element in all of this is the cellular networks themselves. Cingular and Verizon have been very vocal about their desire not to share their frequencies with their competitors. Yet that is exactly what must happen if the proposal to allow in-flight mobile calls is to work.

The proposal is on the table, and the FCC continues to gather information, including results of survey after survey of airline passengers who don’t want the ban lifted. However, a similar plan is being rolled out in Europe this year; and if that is successful, we can pretty much rest assured that American planes will follow suit not much long after.