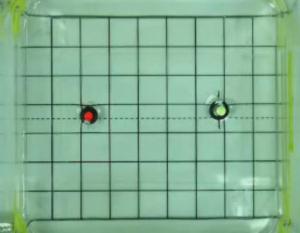 I suspect that there will be a run on Fantastic Voyage rentals in the next few months. Fans and trivia buffs will remember that little sci-fi movie gem as starring Raquel Welch much more than they’ll remember that the vital task the miniaturized scientists had to perform was remove a blood clot. Yet that very thing—removing a blood clot—is something that microbots might soon have a very real chance of being able to do, thanks to a propulsion breakthrough by American and British scientists.

We’ve had microbots entered in animal and human bodies and bloodstreams before, but they’ve been localized and heavily controlled, with no chance at real exploration or performing real functions because scientists had no reliable way of getting them to get up and go. Now, a group of researchers in both the U.S. and the U.K. have been able to use an alternating electrical field within a floating tank of salt water to propel a diode up to several millimeters a second. That doesn’t sound like much, but it’s a far cry from 0 millimeters a second, which had been the industry standard.

The theory is that a series of such propulsion procedures performed on a series of such diodes can add up to a nanoscale version of a workable robot that can be inserted, propelled, and directed within the human body. By using their polarity, pairs of diodes can cause each other to move away from each other. A whole lot of permutations of this kind of technology can power a nanosize robot. Fantastic Voyage indeed.

Check out the technical paper for more.