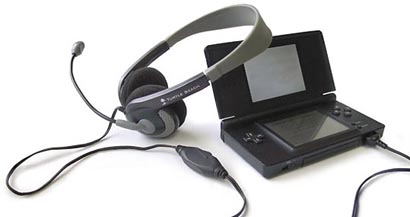 I never understood while the official headset from Nintendo was only a mono number, considering that so many games benefit from stereo sound. Luckily, the good people at Turtle Beach have come to the rescue with the Ear Force D2 stereo headset with mic. This way, you don’t have to yell, “Sit!” as your Nintendog. You can just look like your mumbling to yourself as you ride the subway to school in the morning. You’ll just look a little crazy, and not like a screaming, raving lunatic.

Because the Ear Force D2 has got that mic, it’ll presumably also work quite well with the balloon battle mode in Mario Kart DS. Instead of blowing hard into the DS Lite itself, you can just blow into the microphone boom next to your mouth. Again, you’ll just look a little crazy and not a lot crazy.

And a little crazy is fine by me.