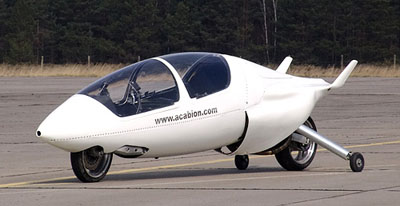 You’d expect a vehicle shaped like a bullet to be fast, and this one certainly is. That fighter plane-lookalike you’re looking at is actually a motorcycle, which has been covered and souped up and given the aerodynamics treatment extraordinaire, so much so that it can reach 265 mph.

This white lightning carbon fibre machine is the GTBO from Swiss automaker Acabion, and it packs a 700hp turbocharged engine, which can get you to just under that top speed in 19 seconds.

Street legal? Yep. Expensive as hell? You bet. The price on this is US$720,000. Assuming that you have that kind of money and you don’t want to buy a really, really, really nice sports car, you should also know that Acabion will be rolling out just 26 of these during the four-year production run.

Other things to note: You’ve no doubt by now discovered the training wheels on the back. Those come in light and heavier size, depending on whether you want to err on the side of speed or maneuverability. Also, this is a cycle built for two, but that would kind of weigh you down, as would anything you’d throw in the 50-gallon trunk.