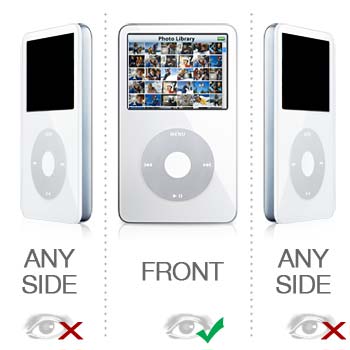 Obsessive types who don’t like sharing their videos with their neighbors will warm to the iPod Video Privacy Screen Protector, from iStyles. The price is really nice, at just US$10, and debunks the myth that you can’t put a price on security.

We rather like the idea of shielding the screen from prying eyes, especially if you don’t know who you’re sitting next to. Even if you do, you might not want him or her to know that you download and watch episodes of Desperate Housewives as your guilty pleasure. Not that we told anyone that you did.

The one odd thing about this device, though, is that it shows a blank screen to anyone who’s not you, basically, looking dead-on at your iPod. So while you might be laughing or crying (or perhaps both at the same time) at whatever’s on the screen, your neighbors will see you reacting to … nothing, which might worry them even further. Then again, that might be the perfect way to get some breathing room on public transport. So now the question is, how do you stop the guy behind you?