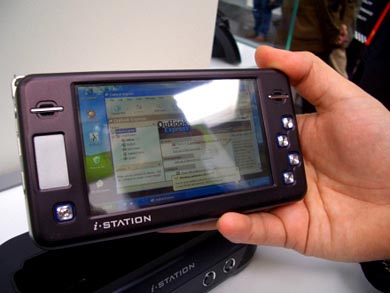 I always thought that the UMPC was supposed to fit somewhere between a PDA and a Tablet PC, but when Digital Cube unveiled the i-Station 43, they proclaimed that it was the world’s smallest UMPC. Wouldn’t that also make it the world’s largest PDA, then?

Instead of the standard 7-inch display that most ultra mobile PCs are rocking, the i-Station 43 has opted for a decidedly smaller 4.3-inch color touchscreen (hence its namesake). Not tiny, but not exactly huge either. Power comes by way of an AMD Geode 500MHz LX800/900 processor, backed up by either a 30GB or 60GB hard drive, 802.11b/g WiFi connectivity, and integrated Bluetooth. There’s no QWERTY keyboard, so you’ll have to make do with the on-screen equivalent.

Based on the pictures taken, it appears the Digital Cube i-Station 43 is still stuck in XP land, not quite ready to take the plunge into Vista. Pricing and availability have not yet been announced.