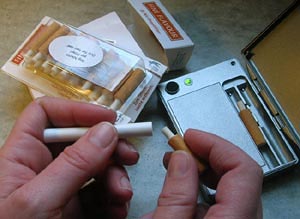 Smoke-less smokes, imagine that. NicStics are battery-operated nicotine dispensers, meant to mimic the experience of smoking actual cigarettes without all that nasty tar and other bad stuff. Instead, it just pumps you full of nicotine when you take a drag. You won’t feel the burn in your lungs and there will be no smoke emitted from either the NicStic or your mouth.

They say that NicStics may be more effective than other smoking cessation techniques, because it still gives the user the experience of sucking on a cigarette, unlike the patch and chewing gum. Interesting idea, but how lame will you look puffing on a cigarette that, well, doesn’t puff?