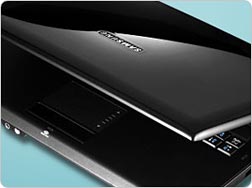 You’ve got yourself a glossy black cell phone, so you might as well get a notebook to match. The Samsung Aura edition laptops are “all built with style as well as performance in mind.” I have a feeling that the glossy black finish is one big fingerprint magnet, but they’re saying that it is “durable” and “eliminates as much visual clutter as possible.”

Not only is it glossy, it’s clean too: Samsung included Silver Nano Technology that will actively sterilize bacteria and other nasty bugs. Other features include Core 2 Duo processors, options for NVIDIA GeForce Go 8000-series graphics, optional DMB, and even the possibility of tossing WiBro into the mix.

The Aura Q45, R20, and R70 sport 12-inch, 14-inch, and 15.4-inch displays, respectively. Pricing and availability have not yet been announced, but we expect all of them to hit shelves by April or May.