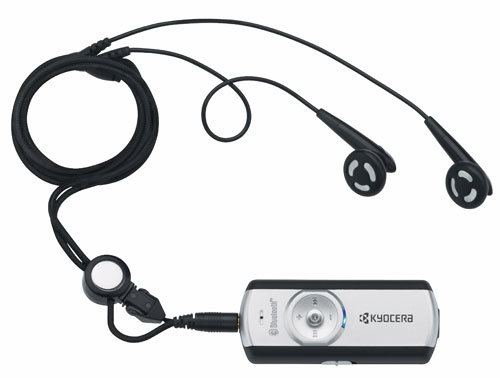 Having a Bluetooth headset once meant that you were among the technological elite, just as when you were the first person among your friends to have a camera phone or one that played MP3s. Times have changed and just about everyone has a cell phone with a camera these days — it’s harder to find one that lacks a picture taker — and the same trend is picking up speed with wireless headsets. There are a lot of Bluetooth headsets out there for you to choose from, and here are a couple of solutions that might be worth your time (or not).

We just received a couple of fancy-schmancy Bluetooth headsets from the folks at Kyocera: the Wireless Stereo Headset with Pendant Controller, and the Portable Speaker with Headset. Let’s take a look at these one at a time.

The Wireless Stereo Headset with Pendant Controller (I know, not the most creative or the most memorable model name) is designed for musicphones like the LG Fusic that they also sent me. What’s the point of having a headset if you can’t have the music blaring into both ears, right? It’s wireless in the sense that the solution is not plugged into your mobile phone, but it’s wired in the sense that the actual headphones must connect to the pendant that will dangle from your neck.

Personally, I prefer the designs that integrate the microphone into the cord or into one of the headphones, simply because it makes for a much cleaner look (and it gets rid of cables altogether). Here, you have a set of lanyard-style earbuds, and you plug in the pendant controller where your keys or whatever would normally go. It’s almost like dangling a tiny phone in the middle of your chest.

The inherent problem with this design is that the microphone — located near the top of the pendant — is so far away from your mouth that when you actually partake in a cellular conversation, you will sound very distant to the person on the other end of the line. As such, I had to actually grab the pendant and hold it close to my mouth in order for the person to hear me properly. This almost defeats the purpose of a handsfree Bluetooth headset altogether, doesn’t it?

Well, if talking on the phone is secondary to you, and listening to wireless music is more important, then this headset does just fine. The music quality out of the ear buds is decent, but not incredible. On the pendant, you have access to basic controls like volume adjustment, rewind, fast forward, and track advance.

Another issue that I had was that while the Wireless Stereo Headset had no problem pairing itself with my Samsung D900, it would occasionally drop the connection and re-establish it, resulting in odd “blips” wherein I would lose my music for a second or two at a time. The phone was in my pocket and I’d still lose the connection upon occasion.

While the Wireless Stereo Headset with Pendant Controller looks fine on paper in terms of connecting to music phones, letting you wirelessly control your music player, and automatically switching to phone calls as they came in (a loud beep would sound in the ear buds), the two issues that I describe above make it difficult for me to recommend this Kyocera product. Perhaps if the lanyard was retractable, the first problem would be addressed.

I rate the Wireless Stereo Headset with Pendant Controller a 5/10. 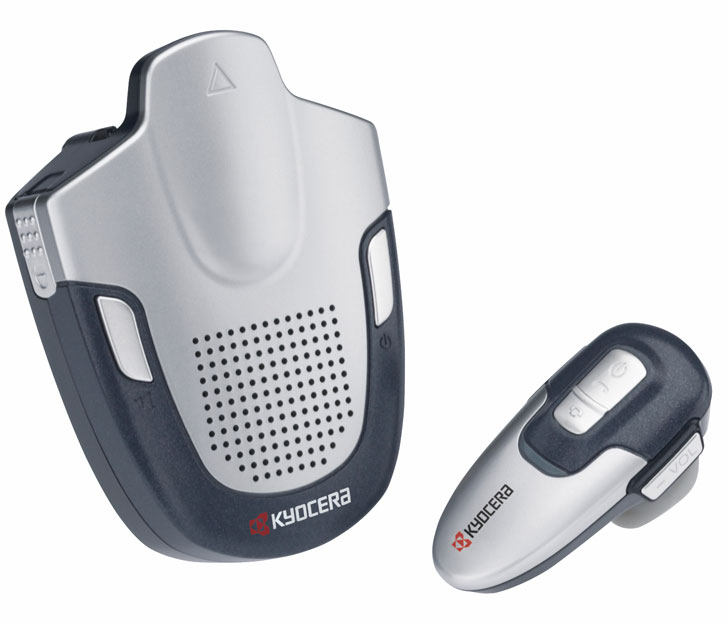 I was significantly more impressed with this product than the stereo headset. The main reason why this Kyocera item is appealing is because you’re essentially getting two products for the price of one.

The Bluetooth (mono) headset can be used on its own like just about every other Bluetooth headset out there. It comes with a silicon cover so that you can use it as an in-ear headset, as well as a loop so that you can go over-the-ear if you prefer. Syncing was easy, voice quality was decent, and the person on the other end of the conversation commented that they could hear me clearly, although I would sound somewhat more distant than if I were using my phone regularly. No major complaints other than the fact that when you use the silicon cover, it feels like the headset is about to fall out at any time (but it won’t).

By plugging this headset into the Wireless Portable Speaker, you essentially give yourself a Bluetooth speakerphone so that you can broadcast that conversation to those around you (great for conferences). The controls on the portable speaker mirror those on the headset, so there’s quick access to answering and ending a call, as well as adjusting the volume on the fly. Sure, the design isn’t exactly fashionable, but the complete package is certainly functional.

It ain’t pretty but it works. The Kyocera Wireless Portable Speaker with Headset easily upheld a conversation even when the phone was a solid 20 to 30 feet away. The connection did start to break up when line of sight was lost though: between floors and through walls, for example. But that is to be expected with Bluetooth in general. Otherwise, I was pleased with the sound quality and I think it’s great that this solution offers two ways to keep wires out of the picture. There’s nothing particularly special, but it’s not that bad either.

I rate the Wireless Portable Speaker with Headset a 7/10.