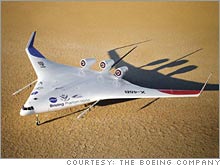 It’s not just drivers of big honking SUVs that are concerned about rising gas prices. Imagine how much fuel it takes to send a 747 across the nation! If everything pans out for the Boeing X-48B blended-wing prototype plan — which takes its virgin flight this month — airlines will be saving up to 30% in fuel costs.

The new design blends the wings right into the fuselage and it eliminates the tail altogether. Conceived by McDonnell Douglas and developed by NASA, the blended-wing prototype is said to be “vastly more fuel-efficient” because it eliminates so much drag compared to regular “tube-and-wing” jets.

The working prototype that they have right now is only one-tenth of the size they hope to build, and while it looks more like a stealth bomber than a commercial aircraft, it could very well be viable for passenger flights. Of course, they foresee military applications as well, like being used as a tanker to “refuel two planes in midair at the same time.” All of that is still some time away, though, as the military version isn’t due until 2022 with a commercial version to follow by 2030.