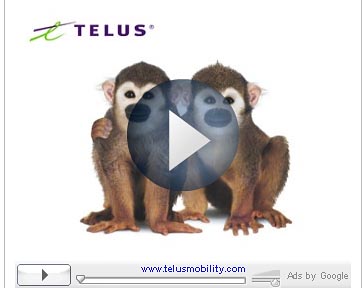 I don’t know if you’ve noticed, but just about every website out there that uses Google Adsense for monetization (Mobile Magazine included) has been bombarded with video ads from Telus Mobility. If you’ve on a computer that’s based outside of Canada, you probably haven’t experienced this phenomenon, but if you’re in the land of maple syrup and hockey, you’ll notice that that Telus is aggressively targetting your IP. This is especially true of the popular 300 box.

I’ve seen this on my own blog (Beyond the Rhetoric), as well as several other prominent Canadian sites like that guy that calls himself the root of all evil. The good news for Canadian publishers is that these ads are CPM (based on number of page views) and Telus put up some really high bids to ensure that they secure that real estate. They’ve even got ad space on sites like Digg.com.

Why the sudden surge? Well, Canada is finally going to get number portability TODAY and Telus Mobility wants to a) retain current customers and b) attract new ones. In fact, there are several Telus text ads in circulation that remind you that you get to keep your phone number when you switch to them.

Will this campaign work? Well, it’s going to take some time to find out… as well as some time to see if Bell Mobility, Fido, and Rogers Wireless retaliate with a Google Adsense campaign of their own.

P.S. The image in this post is just a screen capture and not a live ad.