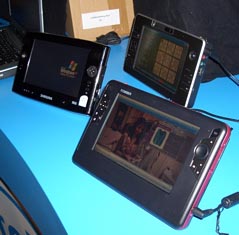 Let’s face it, UMPC’s haven’t been nearly as popular as everyone had hoped. Remember when the internet was all abuzz over the Origami Project and how so many industry pundits thought that it would revolutionize the mobile computing market. Yeah, not that a big a splash. What the UMPC needs is a breath of fresh air. Well, BenQ is reportedly working on its first UMPC for launch in the fourth quarter of this year and it just might be something new and radical.

No real details have emerged surrounding the secretive device, but we all hope that BenQ does something different — sort like what Sony did with the Vaio UX — instead of just following the same template as everyone else. It’s really hard to say, though, considering that BenQ isn’t exactly known for revolutionizing anything. I guess we’ll just have to wait and see.