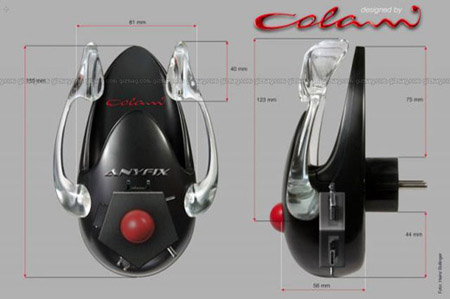 If you can service 80 percent of a population, you really have something. Such is the case with the Anyfix, which can charge 8 out of every 10 European phones on the market today.

It’s simply a matter of pressing the right button on the device, which will extend a corresponding connector to your phone and have it happily juiced up and humming in no time. Other details are sketchy, but we assume that smartphones and more tech-heavy mobiles would take longer to charge than more pedestrian mobiles.

The Anyfix was designed by renowned industrial designer Professor Luigi Colani, who used as the inspiration for his design a beetle known for its streamlined body shape.

You can see the Anyfix at CeBIT. We expect pricing and availability details soon thereafter. And, we assume that this idea will be coming to the Western Hemisphere very soon, since it’s too good an idea to keep on one side of the Atlantic.