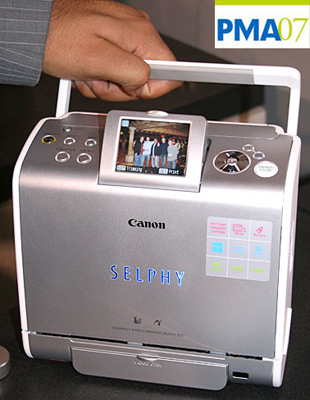 The Selphy ES1 from Canon has been released at PMA 2007.

As you can see from the photo, it’s meant to be lugged around with you, although you probably wouldn’t want to carry it for the entire day. But it does its job of printing on-the-spot color photos (up to 4x8s), and it’s reasonably priced at US$249.

Weddings and other family gatherings naturally lend themselves to setups like this. Actually, being able to hand out photos you’ve just taken at something like a wedding would be very convenient, just like the days of the Polaroid Insta-Camera, except the Canon Selphy ES1 prints aren’t a health hazard if you squeeze them too hard.