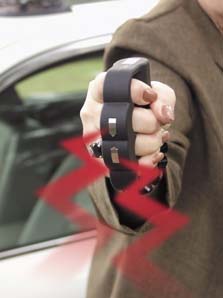 We’re not sure if this device is the sort of thing that you should routinely carry around in your purse or laptop bag, but it’s an intriguing self-defense mechanism all the same.

It’s the Knuckle Blaster Stun Gun, and it promises to pack 950,000 volts of electricity into each jolted punch. That should be more than enough to get some annoying creep off your back. However, we want to urge you not to play around with this sort of thing. That’s a lot of electricity to hit your friends and siblings with, and it goes beyond the definition of “just playing around.”

The soft rubber coating keeps you from jolting yourself. The Knuckle Blaster is moderately priced at US$69.95, so it won’t set you back too much. It also makes a perfect complement to the Taser Defense Jacket that we told you about late last year.