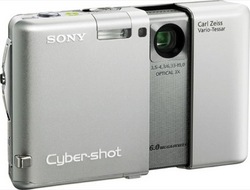 It’s official: Sony has released their first digital camera with built-in Wi-Fi. The latest in the Cyber-Shot line, the G1 incorporates 801.22b/g wireless, allowing you to upload instantly from any hotspot. You can also store up to 2GB in case you’re nowhere near a Wi-Fi zone. Professionals and amateurs alike will appreciate that kind of functionality.

The camera is an above-average one in terms of specs, with a modest 6 megapixels and a 3x optical zoom. You’ll appreciate the optical image stabilization and the larger-than-usual LCD, which reports in at 3.5 inches.

The last feature of note is the ability to shoot VGA movies, which you can also upload. Speed in that regard is probably limited only by the amount of bandwidth your hotspot allocates to uploading.

The Cyber-Shot G1 will be available in April, at a price of US$600.