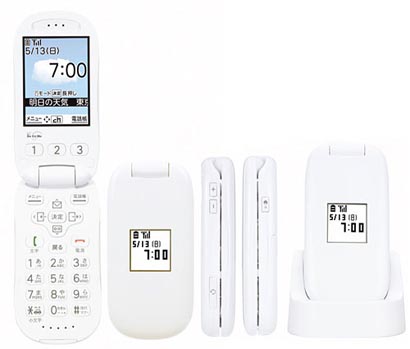 While young whipper-snappers like myself are interested in all the hottest new features found on cell phones, looking to increase the megapixel count on the integrated cameras and so forth, the older population seems to just want a phone that works. More importantly, they want a phone that they can actually hear. NTT DoCoMo has announced the Raku-Raku phone, which may otherwise look like any other clamshell except that it has a “slow voice” function which brings the conversation to a crawl. This way, grandpa can actually keep up with what little Timmy is saying.

There’s also a “clear voice” function that acts as a noise processor, filtering out the surrounding sound so that just the voice comes through. Emails and text messages can also be translated via the text-to-speech function, and then there’s a pedometer to track how many steps it takes to get to the bathroom.

The irony of it all, though, is that the picture they released of the product is a white Raku-Raku phone on a white background. I’d imagine that more mature folk might have some trouble looking at this pic. I know I did.