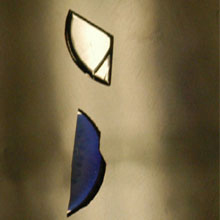 This is potentially a huge development in optics. A group of scientists at Rensselaer Polytechnic Institute in Troy, New York, have teamed up with Crystal IS, a Green Island, New York, semiconductor manufacturer to make a nanostructured coating that has come the closest yet to doing the impossible—eliminating a reflection.

Reflections are the bane of solar cells, camera lenses, and LEDs. It’s not just the aesthetics of such things as reflections on a digital imaging surface, although that is irritating enough.

The coating works on tiny technology, nanotechnology to be precise. Nanoscale rods are projected at certain angles, eliminate nearly all the colors of the visible spectrum and even some infrared, and cut the reflection down to 0.1 percent. Conversely, the coating would increase the light absorbed by a solar cell and incredibly boost the efficiency of an LED.

The technical nature of the coating is such that it drastically cuts down on the difference between the amount of light that air and glass bend. The more bending there is, the more reflection there is as well. Using the nanostructures, the scientists were able to use new technology to solve an old problem.