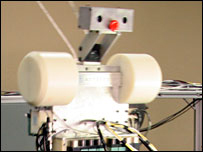 Meet Dexter. He’s still in his formative years, just learning how to walk, to think. But he can analyze 20,000 actions a second.

Dexter is a robot, a product of a California research lab run by Anybots, a group of independent engineers who have put six years of their lives into making Dexter, who can learn from his mistakes.

That’s the key difference between Dexter and others of his ilk, like Asimo, for instance. Honda might have more of a marketing budget, but Asimo’s creators did all of the heavy programming lifting before they ever switched him on. Dexter, on the other hand, was built with the intent that he would learn on the fly. If you think about it, that’s what one of the skills that living, breathing beings do best.

The ultimate goal is for Dexter to do the sort of tasks that might be hazardous to humans. That might be a few years down the line, or it might be six months from now. It all depends on how fast he learns and how fast his creators learn how to help him improve.