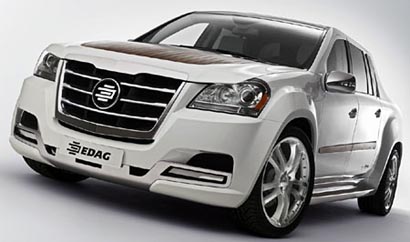 Here’s a hybrid of a different breed. They’ve taken elements from the Chevrolet Avalanche, blended in some prominence from the Cadillac Escalade, and even included the Ridgeline in-bed trunk. The result, the EDAG LUV. This monster of a truck is a Luxury Utility Vehicle, and while some may call it an “engineer’s masterpiece”, others just call it “a vulgar display of bourgeoisie.”

Set to make its official debut at the Geneva Auto Show, the LUV from German automaker EDAG is one crazy Frankencar. They’ve quite literally taken pieces from several vehicles and plunked them altogether. It’s powerful too with a 6.1L engine that’ll propel the heavyset beast from zero to 60mph in six seconds.