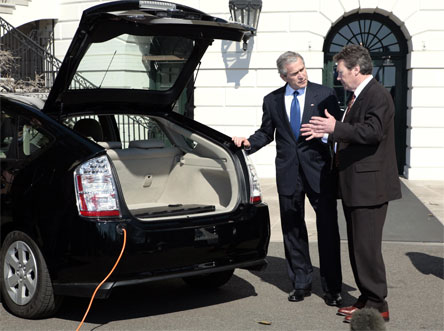 Lithium-ion automobile battery manufacturer A123 Systems of Boston got a big boost last week when U.S. President George W. Bush met with Energy Secretary Samuel Bodman and A123Systems CEO David Vieau to discuss plug-in hybrids. A123 is one of the leaders in the field of battery cells for hybrid vehicles, which are fast becoming a machine of choice for many drivers. Some experts predict that the number of hybrids on roads in the U.S. alone will top 4 million by 2010.

“Every new and converted plug-in hybrid has the potential to reduce oil consumption for that vehicle by as much as 75% and emissions by up to 50% in pursuit of the President’s goal to reduce oil imports by 20% before 2017,” said Vieau. “The President was very interested in talking about the additional research dollars and consumer incentives that would start putting meaningful numbers of plug-in hybrids on the road as soon as possible,” he added.

Vieau was at the White House to promote not only his company but also its work and mission—to make the world less dependent on oil. Bush, who hasn’t exactly been known as a friend to non-oil power sources, has recently embarked on a plan to embrace alternative technology and cut oil imports.