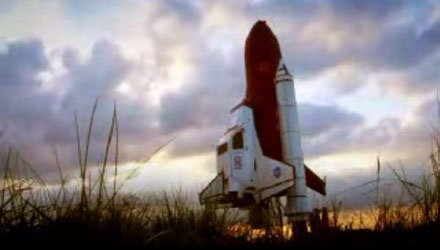 Sorry if you have to squint to see this, but you really should look closely at the photo. That’s not your garden variety space shuttle you’re looking at. Well, not really.

Top Gear workers, in partnership with engineers at The Rocket Men, have managed to piece together a space shuttle mockup from a Reliant Robin, which is a nice enough little car for mucking around town, but not much in the way of payload or for circling the globe in a near-earth orbit.

The whole effort took place during just four months and included wheels, wings, solid rocket boosters, tons of fuel, and a huge helping of inspiration. One close look at this contraption and you’d swear that it wouldn’t go from 0 to 60 at all, let alone get off the ground.

Still, the engineers made it work, if only for a short time. It took off much better than it landed, as you see, although it did garner the latest award for the largest rocket flown in the U.K.