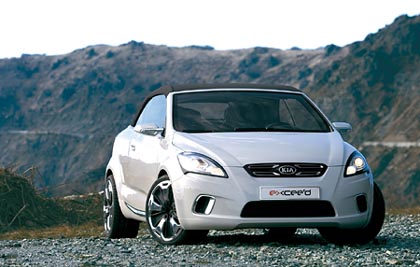 Perhaps it’s one of those rites of passage. After all, how many college kids head on south for Spring Break only to remove their tops for those less than tasteful “gone wild” videos. Kia is said to be the fastest growing automaker in the world and in the process of maturing, they have produced their first convertible, the ex_cee’d Cabrio Concept. Set to make its official debut in Geneva next month, the ex_cee’d is the first vehicle designed under the guidance of Peter Schreyer, the company’s new design chief.

In a nutshell, this droptop takes the vast majority of its inspiration from the not-so-open-air cee’d hatchback, which is set to start selling late this year or early next. The convertible part is not a folding metal roof. Instead, they have opted for a “romantic” soft top. And if you thought those hubless chrome wheels were rather large, you’d be right: they measure 19-inches across.

Other highlights from the Kia booth in Geneva will include the cee’d station wagon and the Kia Rio Hybrid.