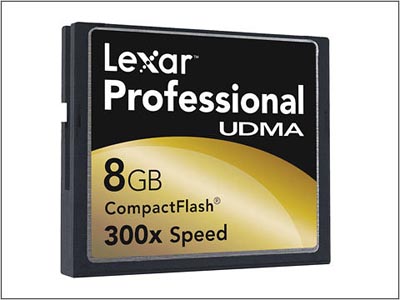 The flash memory manufacturer Lexar has just announced the availability of the new Professional UDMA CompactFlash card. Too bad that is not compatible with anything on the market at this time. Instead, it is designed to work with digital SLR cameras that are “expected to be announced later this year.”

The new super speedy CF card will probably do its work with crazy 22MP DSLRs from companies like Canon. When images are that big, the file sizes are going to be humongous. As such, you’ll need pretty fast data transfers and these new CF cards deliver with a speed rating of 300x (minimum sustained write speed of 45MB per second).

They’re expecting to ship these in 2GB, 4GB, and 8GB capacities for now, with bigger sizes surely following in the months to come. While you wait for DSLRs that’ll actually take these cards, you can grab the dual-slot reader for UDMA CF cards and SDHC cards for $50. The FireWire version is $80.