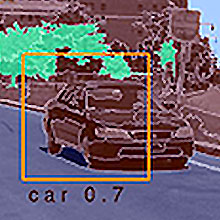 The computers at MIT can see nearly as well as you can, at least in part. A team of neuroscientists at the venerable Massachusetts Institute of Technology have built a computer model that approximates our vision system and can accurately see and classify cars, people, and other objects in a busy street scene.

Such differentiation is crucial to a computer’s being able to identify and rank obstacles and risks, something that the human brain does in the blink of an eye. The computer model contained 10 million computational units, each engineered for a specific part of the vision process. Together, they make up the most accurate “seeing” yet. This can, in turn, have applications in video surveillance and in medicine.

The system has been designed to work only with still images so far. Moving pictures are to follow and will likely require thousands, if not millions more routines and subroutines. The human eye is a powerful thing, after all, and mimicking its movements takes a lot of time and effort—and computing power.