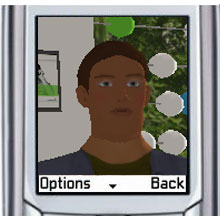 The Grid is growing ever larger and reaching into the real world.

Second Life, whose residents life on their beloved Grid, has new software that allows its users to log in using a mobile phone and communicate with other residents using text messages. Comverse, makers of the software, demonstrated it last week at 3GSM. It is the first cord-free way to communicate for the wildly popular online experience.

Your avatar can do this using an IM, an SMS, or even an MMS, depending on what your phone is capable of. That capability has to include Java-based Internet connectivity as well, which might let out some of the 3.5 million residents of Second Life, who often have computers more advanced than their mobiles. Still, the more residents who have mobiles, the more people there will be who can take advantage of this functionality.

Also on the Comverse table at 3GSM was software allowing Second Life residents to connect through any IP connection, even a dedicated TV box.

Both sets of software proved wildly popular with booth visitors, and the company was at pains to set a delivery date for either one.