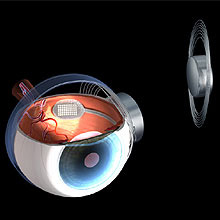 Scientists at USC have developed a retinal implant with four times the resolution of previous versions, they plan to test the effectiveness of that implant on a group of patients who have suffered from retinal degeneration. This kind of cell loss impedes the eye’s ability to transfer light information to the brain. The implant takes the place of these dead cells, transmitting data to a group of electrodes attached to the retina. A pair of glasses that has a wireless camera will provide data to the implanted retina, via a video processing unit clipped to a belt or held in the hand.

The latest implant is half the size of the previous one while also containing 60 electrodes, as compared to 16 before. That’s a significant increase and should allow patients to see outlines of light around doors and windows. For many people, that’s more than they ever thought they’d see again.

Some of the USC scientists are also working on a third-generation device that is projected to have 500 electrodes, which would increase resolution 10 times. That’s well down the road of the eventual goal, which is thousands of electrodes.